The following article was prepared together with Ilkka Seilonen, Aalto University. I have also described the demonstration in a bit more detail in my presentation that was published at the OPC Day Finland 2021.

Check out also the article OPC UA PubSub Explained, which gives more details about the OPC UA technology used in this demonstration.

Manufacturing Gateway is a concept of a gateway server that can be used to deliver data between local device servers at a manufacturing site and external information systems like cloud servers. OPC UA is nowadays a natural technology for developing such a gateway, particularly, if we can assume all device servers to be OPC UA as well. Prosys OPC UA SDK for Java has been a suitable tool for implementation in these tests. Particularly the new OPC UA PubSub (OPC UA Specification Part 14) features of the SDK were used.

When configuring the gateway, you first need to specify the information model to be used. This model defines how the external information systems will see the data of the manufacturing site. In our experiments, we have used the Process Automation Device Information Model (PA-DIM). It is a rather new standard model for process industry that could bring new benefits in handling information from different processes in a standard way.

The second task is to observe the information models of the device servers at the manufacturing site. These models are usually device specific, but it should be possible to create a mapping between these and the higher level model at the gateway.

The mapping is created with an algorithm that runs at the gateway server. It will go through the data at the device servers and tries to identify what needs to be represented in the gateway address space. In the PA-DIM model the relevant objects are instances of PADIMType. They represent data from the automation devices and their measurement and actuation signals. This information is located at the device servers and mapped to the gateway.

The communication between device servers and the gateway is to be defined in two parts: sending messages at the device servers and receiving them at the gateway. Both parts share a common PubSub connection, which in this case is an UDP connection with binary messages. At the device servers a few variable values are configured to be sent. At the gateway server, the same number of variables are configured to be read. However, the names of the variables at the sending and receiving servers are different because they are defined in different information models. The communication from the gateway to the external information systems can be done with PubSub MQTT. This time the confirmation of communicated variables has to be agreed with the administrators of the information systems receiving the data. A simple way is just to define a few variables in the address space of the gateway.

OPC UA PubSub defines a standard JSON Message Mapping for the messages, which helps dealing with data from different systems in a similar way. The following is an example of a data packet sent by the Manufacturing Gateway.

The presented approach to design a gateway can be made to work at least in simple test cases. However, we do not know yet if the approach would scale up to more complicated situations. The mapping of data models starts from the objects at the gateway whose content is then looked for at the device servers. With the objects of PA-DIM this seems to work, but other more complicated objects have not been studied yet. Also the number of objects in the mappings and communication has until now been quite limited.

The Manufacturing Gateway concept has been demonstrated in a global context, together with the Shanghai Jiao Tong University (SJTU). The researchers at SJTU have a small assembly line and they can access and use the information broadcast from Finland, where the Manufacturing Gateway is running. An MQTT Broker is used in between to deliver messages between the separate manufacturing processes in Finland and China and we have evaluated that the concept works in practice. Listen to the details in the presentation that I gave at the OPC Day Finland 2021 about this. 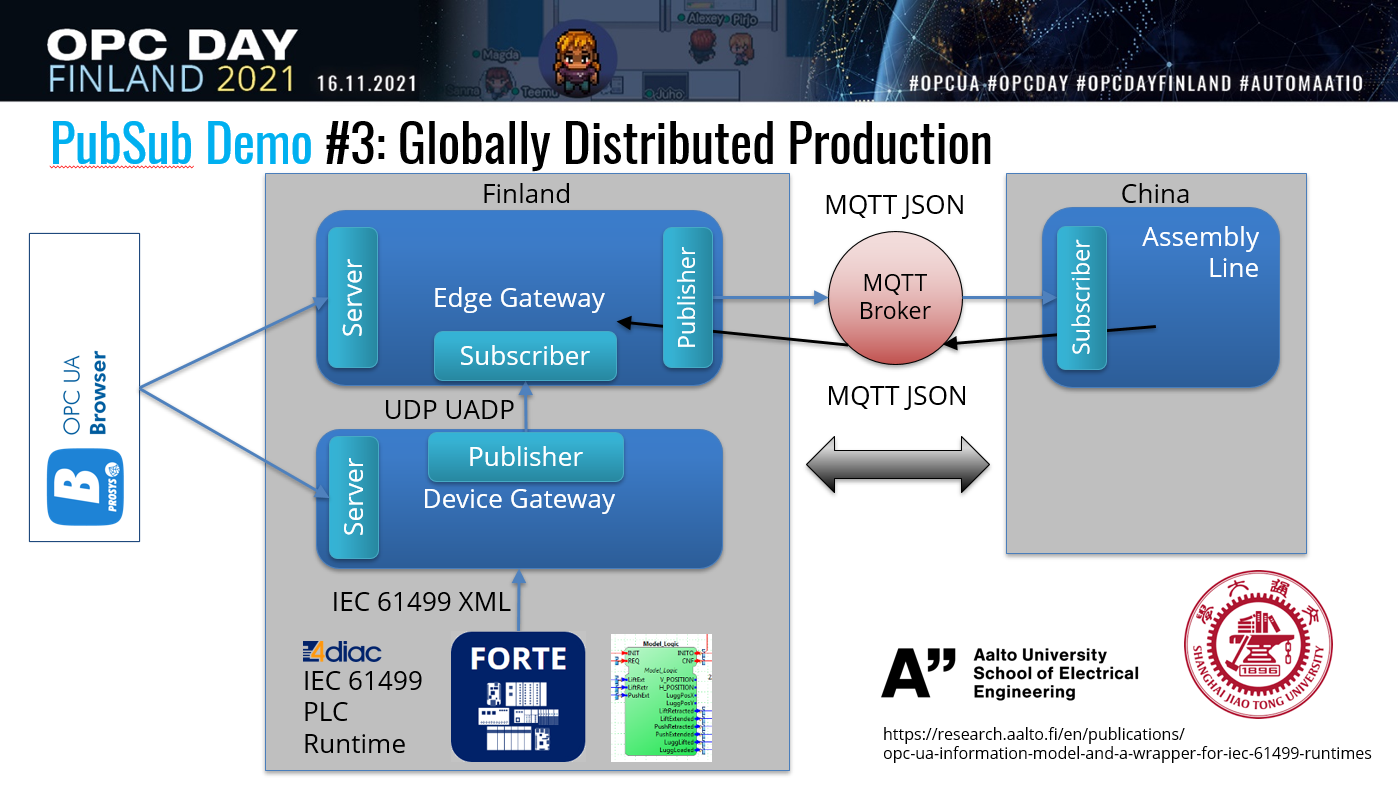 You can also read more about the research in relation to mapping Device data from IEC 61499, which was the target device hardware in this case, from this report.

The presented demo enables verifying the concept of the Manufacturing Gateway. The communication between the device servers, the gateway and external systems can be implemented as PubSub messaging. At least simple mappings between device and gateway data can be done with the algorithm. We are looking for more complicated test cases to evaluate and develop this idea further.

OPC UA vs MQTT (or OPC UA over MQTT)

Our input on the debate of the differences between OPC UA and MQTT and how actually there is competition.